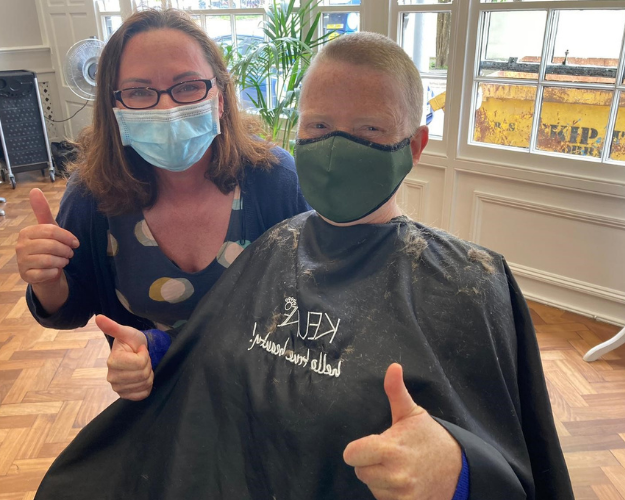 My head shave by Julia, part 1

In the days leading up to Friday 11 June 2021, I began to get quite anxious about what I had been saying I was going to do since early May – shave my head to raise money for the Life Begins Fund (LBF) and raise awareness about the disproportionate impact that the lockdown and Covid-19 has had on women.

I had been feeling angry and frustrated about the stories I was hearing and reading about:
• Women being the first to lose their jobs in the sectors where face-to-face contact is part of what they do – retail, healthcare and childcare;
• Women losing out on benefits – the extra £20 a week uplift to universal credit did not cover the additional costs of being at home all day, especially when many women in low paid work and claiming UC had lost their income from paid work;
• Women being the ones who were caring for those who got sick – 77% of hospital workers and 74% of those working in education are women.

I knew that Trevi had a fund dedicated to supporting women trying to get back on their feet because as a Trustee I help to make decisions about how to allocate the Life Begins Fund. It was heart breaking to hear the background stories from women asking for money to pay for the cost of travel to interviews, buy IT equipment to support their children’s learning and pay for much-needed talking therapies for the after effects of PTSD.

So, when I visited Jasmine Mother’s Recovery centre, met some of the amazing women who work there and especially Hayley Dann, the fundraising and marketing lead, I could see that there was something that I could actually do myself to make a difference.

In 2020 Hayley had her head shaved to raise money for Trevi. The way she talked about her experience and her infectious enthusiasm for all things fundraising made it seem like a possibility for me.

Like many others, the repeat lockdowns made me feel a bit powerless at times so when I decided to start my own head shaving campaign it also gave my mental health a real boost!

I set myself what I thought was a realistic target of £1,500 (no match for Hayley’s £3,000 but she’s a pro). I got loads of support from Hayley about how to set up a Just Giving page and what practical things I needed to do (e.g. book an appointment at the hairdressers). Then I started the process of reaching out to friends and colleagues. It was a great excuse to make connections with people I hadn’t been in contact with for a while.

The responses were different: not always positive but enough to start a conversation. At the beginning I felt really awkward asking people for money – I know that things have been difficult for lots of people. But then the unashamed instinct to reach my target kicked in and by the last week I was even going back to people who had already sponsored me and asking for more! I was really touched and impressed at their generosity especially from my friends and family who have no connection with Plymouth but were obviously cheering me on. I am still sending them thank you messages which has the double benefit of making us stay in touch.

I concluded that donating is a very personal thing and the reasons why someone might decide to donate to a cause are not just connected with how much money they feel that they can spare. Often those with the least are the most generous.

Throughout all the fundraising activities (e.g. obsessively checking my JG page every half an hour) I lost sight of the fact that I was going to have to have my head shaved. I have been growing my hair for 20 years. I bought head scarves and beanies thinking I would resemble someone who had had chemotherapy and actually found one website that makes head gear for people who have lost their hair through illness. That led me to the Little Princess Trust who make wigs for people who have lost their hair. I have given my hair to them and like to think of another person for whom my hair is something that helps them. I chose to get this look, but I can imagine that someone who has had to deal with what must be the devastating transition to having an illness that is so serious that your hair falls out, the daily reminder when they look in the mirror must make it much worse.

The pandemic has highlighted the reality that we live in a very unequal society. Disaster patriarchy was a term in a headline that talked about the reality that men exploit a crisis to reassert control and dominance and rapidly erase hard earned women’s right in employment law, education, healthcare and childcare. When childcare disappears because nurseries close, many fathers seem able to continue working unaffected. When schools close especially in developing countries, girl’s education is affected far more.

We know that one change that could really help the planet to reduce the effects of climate change is for girls to be in education – they then establish businesses and have fewer children. In poorer countries where overpopulation is a major contributor to climate change difficulties, this is crucial.

For me, the pandemic has highlighted the need to be focussed on what is going on and what each individual can do to make a difference. Also, while we have to take care of our health, wellbeing and that of our families, we need to keep an eye on what is happening to those around us, especially the ones who, for whatever reason, may not be able to take care of themselves.

Women come together to raise ‘n’ shave for Trevi