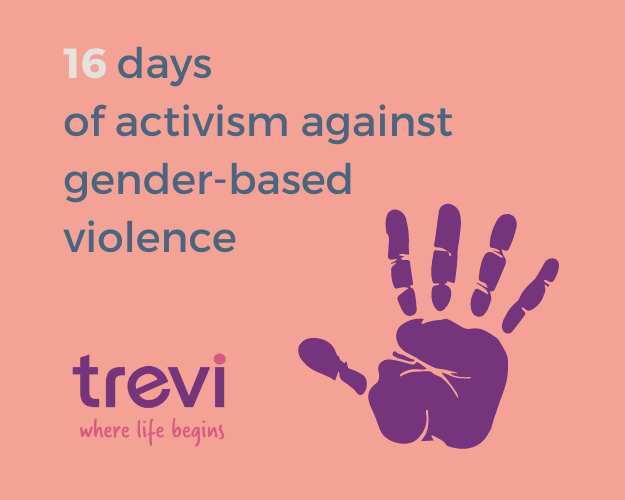 16 Days of Activism – we remember you

2021 marks the 30th anniversary of 16 Days of Activism, a campaign launched globally in 1991 to raise awareness around violence against women and girls. Every year, Trevi, being the leading women and children’s charity of the Southwest, marks 16 Days of Activism with a series of events. Last year, during the height of the pandemic, Trevi was impeded from honouring the women murdered at the hands of men with their usual ceremonies of remembrance.

However, these women were far from forgotten, instead we came together virtually, remembering each woman in a video made by the team at Trevi, and a blog written by myself.

This time last year the Government message was clear- “stay home, save lives”; unfortunately, this meant that thousands of women (and their children) became trapped indoors with their perpetrator and without their usual support systems. The Crime Survey for England and Wales showed a 7% increase in recorded acts of domestic abuse. In April and June 2020 alone the National Domestic Abuse helpline received a reported 65% increase in calls to their helpline, in comparison to January-March 2020 (Commons Library.parliament.uk).

This year the message is to go out, enjoy the new normal, but to stay alert. Stay alert? We as women are trained from small girls to remain alert.

At the beginning of March 2021, just as the UK began to hesitantly take its first cautious steps out of Lockdown 3.0, 33-year-old Sarah Everard was raped and murdered as she walked home from her friend’s house. As she had been taught, she’d remained alert to any potential acts of violence towards her, deploying the common tactic women often use of making a phone call to their boyfriend or friend, in an attempt to increase feelings of safety. What Sarah could not account for was the police officer that intercepted her walk home under the guise of her having broken a Lockdown rule. The police officer who proceeded to falsely arrest and manipulate her into entering his vehicle. The abduction, rape and murder of Sarah Everard caused outrage and sparked a social justice movement. Peaceful protests, vigils and marches up and down the country planned to “Reclaim the Night,” a movement first seen in Leeds in 1977 as part of the Women’s Liberation Movement, the response to the lack of action from the Police during the “Yorkshire Ripper” murders.

As chants of “she was only walking home” rang out, a dialogue opened. A dialogue usually reserved for small groups of women- as their female friend or loved one makes their way home- those six words “text me when you get home.”  The brutal killing of Sarah Everard highlighted the deep sense of unease women feel, simply being female. The keys we carry in a fist, the calls we make as we walk home, the streets we avoid as they are unlit, the gazes we avoid meeting, the locations we share, the texts we send to reassure loved ones we have made it home safely. These are behaviours engrained within us from childhood solely due to our gender, the small actions we take every day to “stay alert.”

I asked a group of women on a Reclaim the Night social media platform what THEY wanted you, the reader, to know. RWM told me “ Men have had a free pass for long enough, I’m exhausted with sharing just how oppressed we are, I don’t even want to talk  about it anymore, I want the conversation to be by men, amongst men, for the good of everyone”, and TJ, she wanted you to know that she wanted “men to be held accountable every time, I want to have my freedom, I want to walk my dogs or leave the house after dark safely”.

And since Sarah? As of 12th October 2021, a further 68 women were murdered at the hands of a man, bringing the total for this year (as of October 12th) to an appalling 115. Sabina Nessa, murdered September 17th, was walking a short distance from her home to meet a friend at 8:30pm, just eight miles from the abduction site of Sarah. Another premeditated, predatory stranger attack against a woman. And whilst the Metropolitan Police would like to offer reassurance to women by stepping up “reassurance patrols,” we do not feel reassured, in fact we feel desperately angry.

So this year, to mark the 30th Anniversary of 16 Days of Activism, I will not tell a female friend to text me when she gets home. Women are NOT the ones who need to change. Instead, I will continue to implore male allies to speak to their counterparts about the role they play in making the streets a safer place for women. For their mothers, wives, sisters, and daughters.

Local women’s charity secures £900,000 from the Tampon Tax Fund for a partnership...